At the IFAT impact Business Summit, Prof. Xianlai Zeng from the Tsinghua University Beijing (School of Environment) reported on the vision that the first zero-waste cities could already exist by 2050, not only in China but worldwide.

According to Prof. Huijuan Dong, University of Shanghai (School of Environment), the concept of zero-waste cities in China is closely oriented to the concept of the circular economy (CE). This is based on the three “Rs”—reduce, reuse, recycle—and is supplemented by the aspect of reducing the landfilling of waste. Two main paths will be followed to develop the concept: industrial and urban symbiosis. Industrial symbiosis means that factories in China should increasingly use their own and foreign industries' waste as a source of raw materials. The waste produced from households (urban symbiosis) is also to be recycled in industry and returned to urban households, for example in the form of waste heat. Basically, the Japanese project of “ecotowns" is a model, said Dong. Initial approaches are already being made in Shanghai or Beijing. Other cities should follow this example.

Prof. Nana Zhao, who works at the Basel Convention Center and the Stockholm Convention Regional Centre for Asia and the Pacific, presented the government pilot program for the development of zero-waste cities in China. The program started in 2018 and is running until 2050. A total of 11 pilot sites and 5 regions were selected for special support and evaluation (11+5 program). Among them are big cities such as Shenzhen, Xuchang and Chongqing. On the part of the Ministry for the Environment, a coordination group was set up to accompany and promote the development, said Zhao—last year, for example, through a major conference and workshops. The Chinese Development Bank had made 4 billion yuan available for the program (this equals around 500 million euros). At the moment, the first phase of the project (2019–2020) is underway, in which the pilot sites are implemented, Zhao continued. From 2020 to 2035, the locations are to develop and pass on their experience to other regions. Zhao concluded by stating that full implementation of the zero-waste cities is planned for the years from 2035 to 2050.

European initiative has a large network

The European project “Zero Waste Europe” was also briefly outlined. In contrast to the Chinese example, it is supported by a non-governmental organization and currently has a network of 400 cities. Program coordinator Jack McQuibban mentioned some best-practice examples from the initiative, including the cities of Contarina (Italy), Salacea (Romania) and Ljubljana (Slovenia). 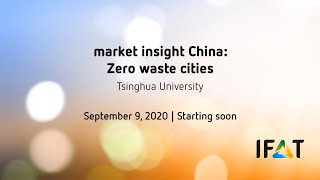 Apply online as an exhibitor for IFAT Munich 2024.

Secure your online ticket for the environmental technologies of the future now.

We want to set a good example and make IFAT Munich more sustainable in an ongoing process. Learn more!